RJ Cycling Camps is run by Rachel Paling and James Williamson. We have been directly involved in the sport of cycling at the highest possible level in the UK and internationally.

In 2016, we planned and led professional UCI Team Raleigh-GAC’s training camp here in the Marina Alta, which prepared them for the race season.
In 2017, we guided and supported ultra endurance athlete Mark Beaumont with his training, in preparation for his successful world record attempt ‘Around the World in 80 Days’.
In 2018, Tom Pidcock (then U23 European Cross Champion, 2017 World Junior Cross Champion & National Crit Champion) joined us for a week’s training with a group of up and coming talented British Juniors.
In 2019, we planned the routes for Vitus Pro Cycling Team training camp. 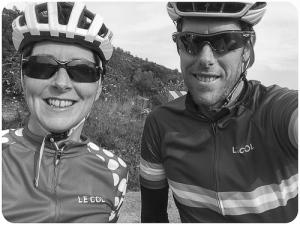 James has grown up with cycling, racing from a young age in the UK before moving to France to develop his talent for three seasons, supported by the Dave Rayner Fund.

James finished his racing career with the UCI Continental Team Sigma Sport-Specialized where he competed in races against top professional cyclists from UCI World Tour Teams.  Since retiring from professional racing James has worked full time with the Great Britain cycling team as a mechanic, travelling all over the world for numerous events, including the World Road and Track Championships for both the para-cycling and able-bodied squads. Most recently James worked with the GB Olympic squad on their training camps in the run up to Rio 2016. He has worked with some of the best cyclists in the world such as Olympic gold medallists Laura Kenny CBE, Jason Kenny CBE, Jo Rowsell-Shand MBE, Dani Rowe MBE, Ed Clancy MBE and Dame Sarah Storey to name but a few.

All of this invaluable experience and knowledge has been combined to create RJ Cycling Camps.

This site uses Akismet to reduce spam. Learn how your comment data is processed.