RJ Cycling Camps were delighted to be invited to the 2016 Katusha Team Presentation held in Spain at the team’s training camp base in Calpe. As half the World Tour teams use this area for winter training this was a perfect location for the occasion.

An elaborately decorated stage and screen greeted us as we took our seats awaiting the start, surrounded by sponsors, partners and other invited guests who had flown in from far and wide.

The lights went down for the start of the presentation with an excellently produced introductory film and vibrant music, which gave the history to the team, riders and management so far.

Viatcheslav Ekimov, the General Manager of the team, gave an interview to the audience explaining how exciting and motivated everyone was for the forthcoming season.

See more images in our Gallery

A second powerful film then gave a taster of what was to come with the new look and branding to the team; Team Katusha – #racetowin.

Juergen Van Der Broek, Simon Spilak, Joachim Rodriguez, Alexander Kristoff, Illnur Zakarin and Rein Taaramae rode onto the stage with their Canyon bikes to be presented to the audience. The riders were all motivated by the changes and ready for racing. Fifteen different nationalities of riders will make up the team for 2016 with forty members of staff and targets set for Grand Tour podiums.

Team Owner Igor Makarov was invited to the stage and gave his thoughts on the new look team. 2016 would be a key year for Team Katusha transforming from a name to a brand, with no compromise.

The brand new team car supplied by Skoda was then unveiled displaying the new team colours and impressive wrapping. 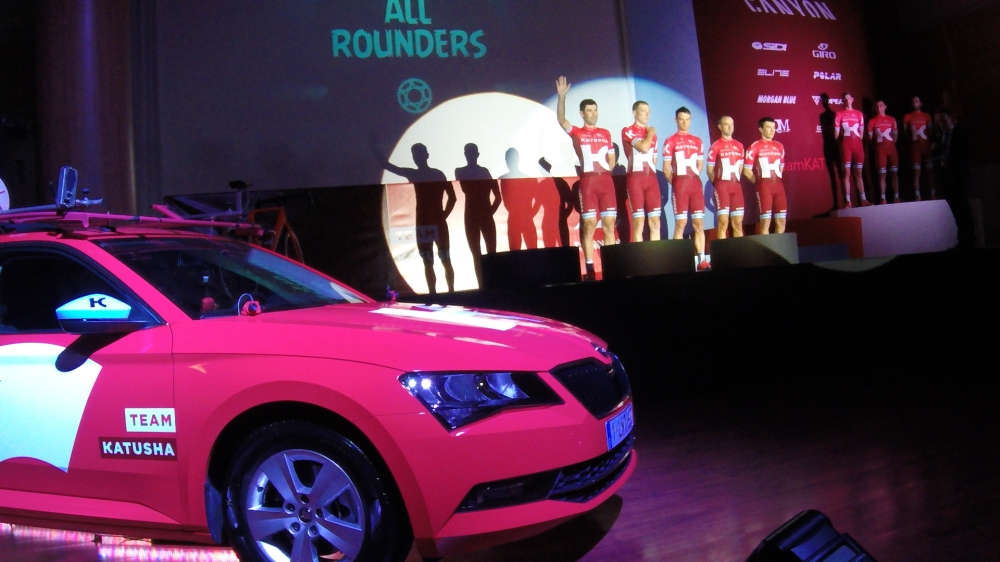 The 2016 team race bike is to be the Canyon Ultimate CF SLX which has now been upgraded with the wireless SRAM Red eTap. The bike is completed with Zipp wheels and Continental Tyres. 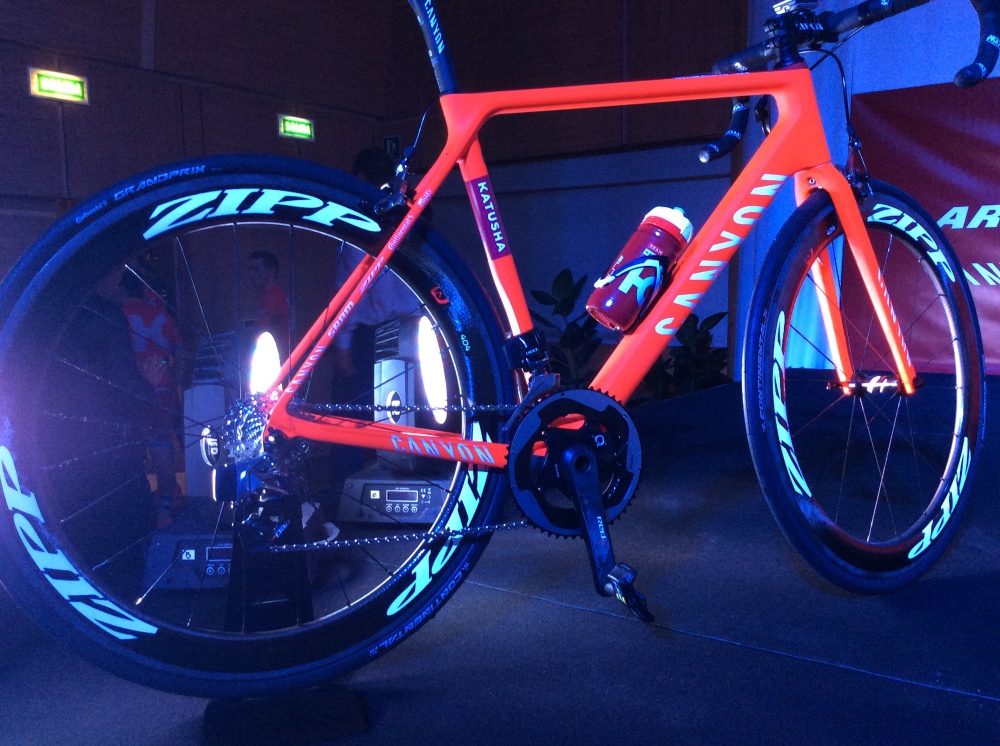 It was announced that Katusha is to become an overall brand now to be known as Katusha-Sports and is set to deliver huge projects such as – cycling cafés, travel, clothing, events and a cycling town.

Jean-Philippe Torgue, the CEO for Clothing & Apparel, Katusha-Sports, spoke about some of the clothing collection from the newly launched Katusha-Sports brand. A full range of Performance cycling clothing (Perf) including team replica kit and casual wear would be available to fans of the team and cycling from April 2016. The Urban Collection (Urb) would be released September 2016. This range will be mainly available online through digital services but Katusha-Sports was considering placing the clothing into major cycling city outlets such as London.  Jean-Phillipe told RJ Cycling Camps that a women’s range was being developed and was hopeful it would be available for the 2017 season.

They would be looked after by five Sports Directors.

Overall, the event was very dynamic and excellently presented and definitely a team to watch out for on the World Tour stage in 2016. You certainly won’t miss the kit!